On Depression and Selfishness

A number of years ago I had a friend who broke up with her boyfriend, who was suffering from depression, in a semi-public, semi-dramatic fashion on Facebook. She listed his depression as one of the reasons she’d broken up with him, calling depression “the most selfish of diseases.”

I wasn’t particularly close to this friend, we were just Facebook friends, we’d talked with each other at a weekly communal dinner that used to meet but had since stopped and so we hadn’t actually seen each other face-to-face in a number of years. In the time since I’d last seen her, I’d been hospitalized, I’d gone through ECT, my life had fallen apart completely, and I’d been struggling to put it back together again piece by piece. The comment wasn’t particularly offensive to me at the time (or even now), it’s just an interesting thought. And now that it’s been churning in the back of my head for a good five years, I figure it’s high time to process through it:

Is depression, is mental illness in general, a selfish disease?

I suppose the declaration, like all declarations, comes down to definitions – what do you mean by selfish?

I would say yes, though not necessarily in the conventional sense of the term. It’s necessarily selfish, it isn’t selfish in the sense of a narcissistic kind of selfishness we so often associate with the term – the me-first, me-only attitude we associate with selfish spoiled brats who grow up to only think of themselves. As a person with a mental illness – I often have to think about my needs first in order to think about other people’s needs because if I don’t address my needs properly then other people will suffer. So, in a sense being “selfish” about where I can go, what I can do, who I can spend time with is beneficial for everyone involved. Because if I find myself in a place where I know I’m not supposed to be – a crowded bar or a loud show, I’m going to get to the point where I can’t take care of myself and will instead have to rely on the people I’m with to take care of me. Bad things will happen and everyone will agree it would have been better if we hadn’t gone in the first place than to have gone and made Chris suffer and everyone else take care of him.

The desktop background on the computer I’m typing on right now has a picture from when I was little. It’s of me and my dad sitting in the rocking chair he bought and finished for my mom and me when I was born (a rocking chair I still have in my apartment). I’m maybe five years old, much too old to have the pacifier I have in my mouth – I look like I’ve been having a rough time. We think it was maybe around the time I had to have a special retainer in my mouth that had to be tightened every night to keep my teeth straight, a process that was very painful for me, a process my dad didn’t like doing but did anyways because it was good for me. 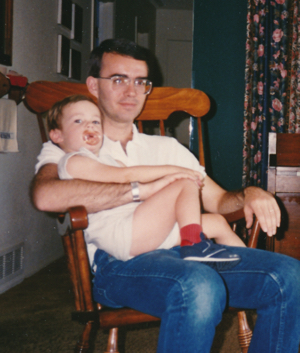 I have that as my desktop background to remind me of how things work in my family, to remind me that mental illness might be inherently selfish, but it’s also a blessing. When you have to rely on people to take care of you, you develop a sort of intimacy with them you don’t get otherwise. As my five-year-old self is sitting on my dad’s lap, I’m developing a bond with him; he’s comforting me and I’m gaining the knowledge that he loves me and will always be there for me. And that’s remained true to this day, that’s remained true with my entire family.

It’d be easy to wonder in the situation with my friend and her boyfriend to wonder who, ultimately was being selfish…but I didn’t have enough information into the workings of their relationship to make any kind of guess about such things – just that little tidbit, just that little Facebook Status Update. But it’s easy to lose perspective when someone suffers from mental illness that someone is actually suffering because of how silently we oftentimes suffer.

I look at that picture of me and my dad and can’t help but think that “selfish” was the wrong word for my friend to use, though it seems the easiest word to use. The problem with using it is the complexity of the English language – selfish can mean many things. There’s the strictest sense of the word (its denotation) and then there’s its connotation, all the other things the word suggests, the word’s weight in the context of society. I remember my old roommate arguing that people shouldn’t be so offended when he called them ignorant because all it meant was that they didn’t know something. I had to remind him of the connotation of the word, that “ignorant” carries a certain offensive weight to it one can’t get away from.

So with that in mind – the connotation of the word “selfish” – I’m going to say mental illness isn’t necessarily selfish. It certainly can be, but as a rule I don’t think it is. If you’re going to get technical about it, then yes – it is. Because when considering many day-to-day activities and interactions with other people I have to put myself first. But, like I’ve said above, in thinking about myself I’m also thinking about others. So thinking about mental illness as selfishness in the strictest definition of the word is also to think about it in the narrowest, shallowest sense of the word. It doesn’t encapsulate the entire idea. Technicality just isn’t effective here. Because selfishness doesn’t create bonds with other people, it doesn’t strengthen relationships. Selfishness isolates you from other people, it makes people resent you and that certainly hasn’t been my experience with the kind of selfish I’ve had to be with my illness.

When you rely on someone, when you count on them to keep you safe, to keep you alive in certain instances, when they’re your sole source of comfort, when they provide you your place of solace and rescue, there’s a certain bond that forms. I see that bond forming in that picture on my desktop: five-year-old Chris and his dad forming the bond that will get them through so many tough times twenty-four years later.

It’s not selfishness that does that, it’s selflessness that does that. It’s vulnerability, it’s being willing to open up and share those dark parts of you. Mental illness want to close you up, wants you to shut yourself up to the outside world and perhaps that’s what my Facebook friend meant by mental illness being “the most selfish of diseases.” It’s important to have an open line of communication, it’s essential to have that bond like I have with my parents, and especially with my dad. If mental illness wants to keep things closed, you have to make sure to keep things open. It’s difficult, but not impossible. It takes work, but that work is worth it. I oftentimes think that if there was one key to my success with mental illness it’s my relationship with my family – the support I have from them and the willingness they demonstrate, to help me however I need it.

Want to know more about my upcoming new novel? Click the link that says “My New Book” on the menu at the top of the page and follow the instructions to be signed up for periodic updates.